We started our (once again rainy) day in the Asian part of Istanbul and met a local at the petrol station who advised us to take a more scenic road than the one we originally planned. At this petrol station Team Schwabenstahl decided to spend the day with us. So 9 cars and 18 people headed to Haymana. 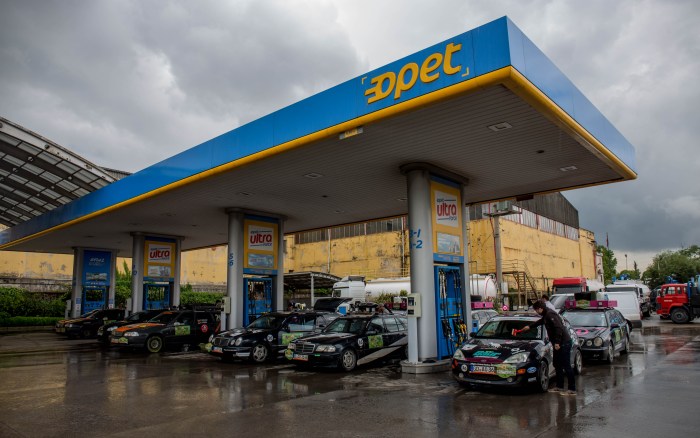 On the way we had planned a stop in a hotel to ask if we could take a much needed and wanted shower. We stopped in front of Crazy Cafe in Kaynasli, in second row so Oli could run into the hotel to ask. Immediately the owner came out and offered the famous Chai. A lot of young locals talked to us without being able to share the same language and we were stunned by the open and friendly atmosphere in that place. We felt very welcome and enjoyed delicious Turkish food, while the teams took turns in taking shower at the local hotel. 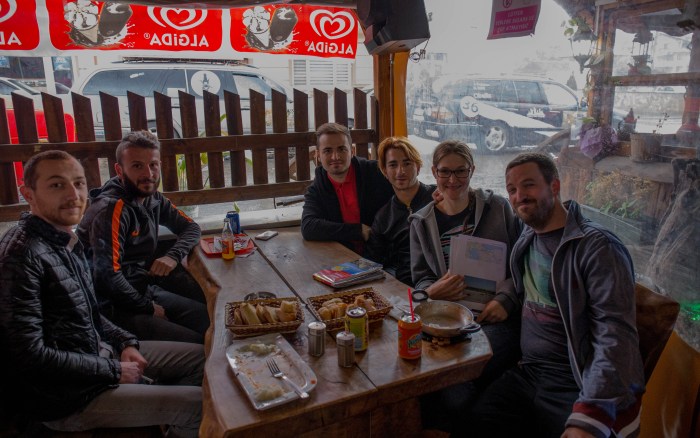 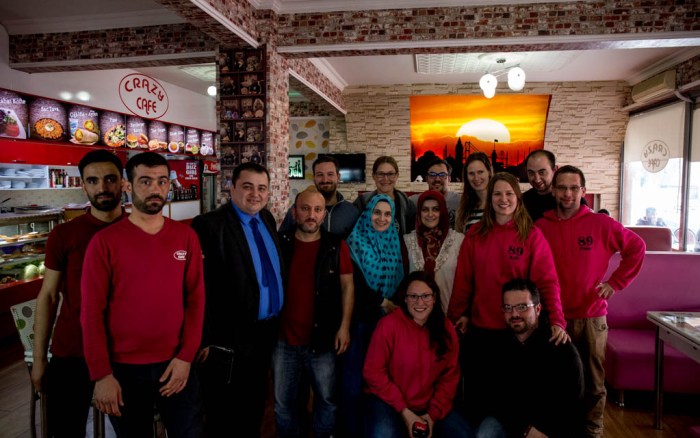 Feeling fresh we drove the scenic road through winding roads, beautiful green pastures with little rivers, herds of sheep with shepherds and a lot of gravel roads. There we had the first little breakdown: flat tire from Team Fehlzündung. 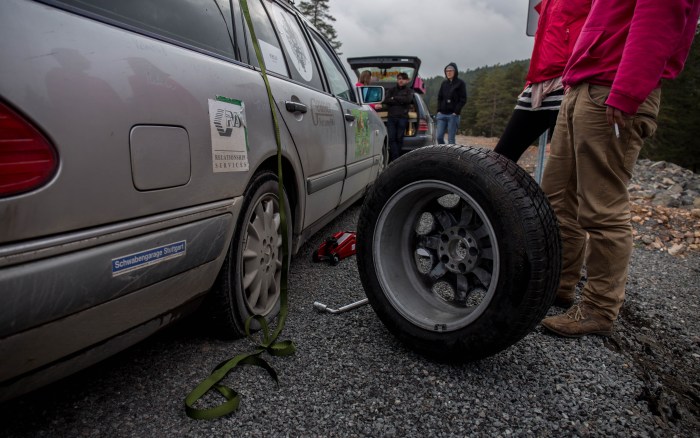 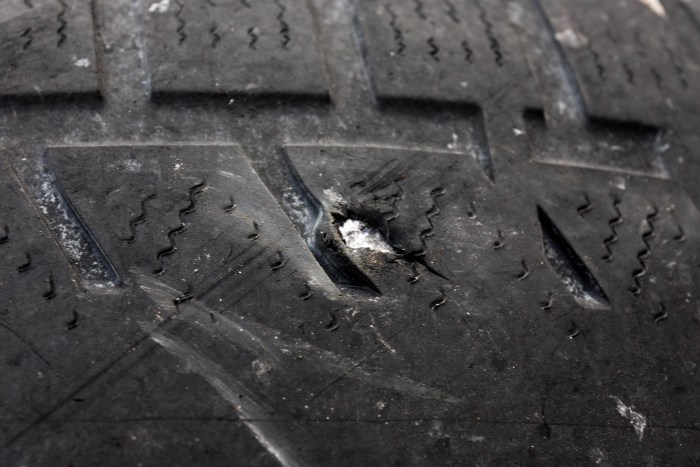 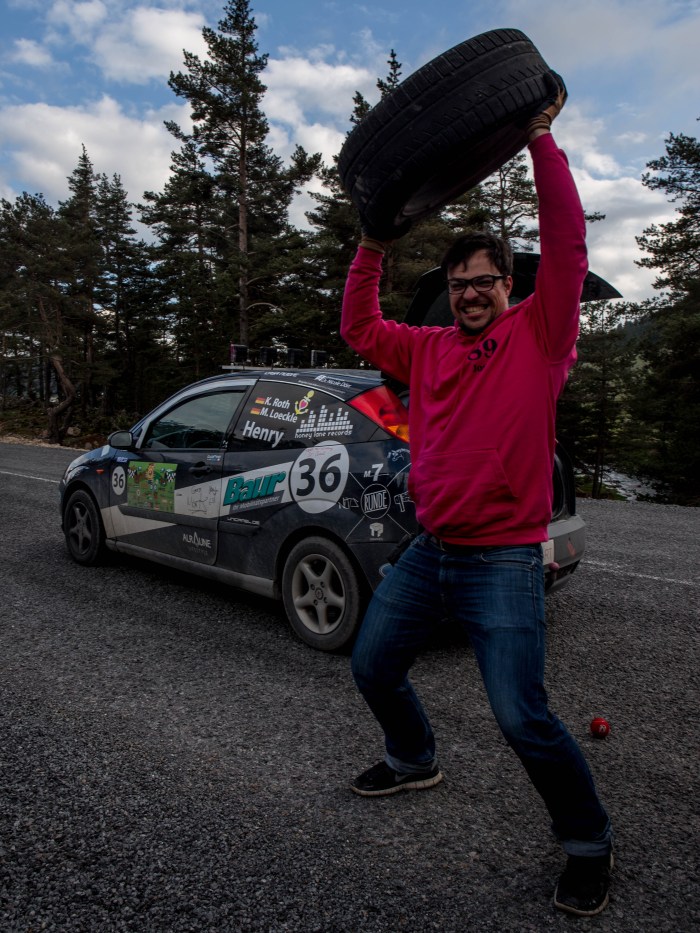 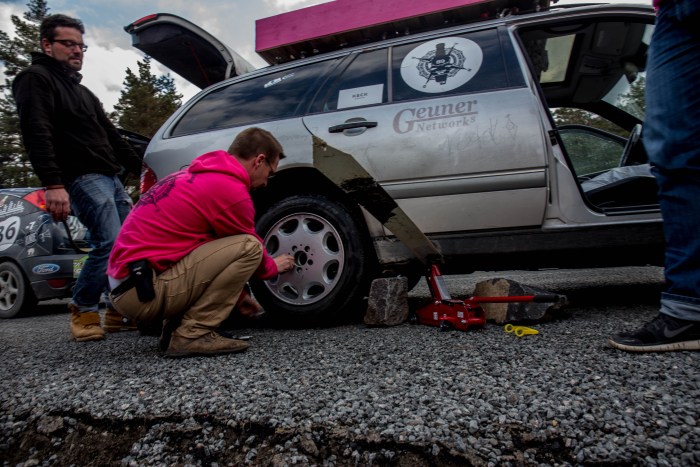 But as it seems, for every bad thing that happens, we get something positive in return. While changing tires a sheperd dog decided to have a good luck at us… And then the police drove passed and asked if we needed help. We took the chance and let them model with us and the dog! This helped us to get pictures to fulfil the Hündles Challenge: person in uniform + dog + team. 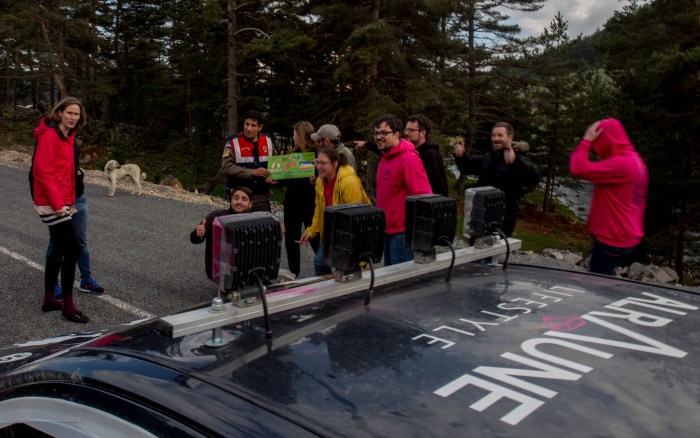 We had another little photo stop in quarry where took beautiful pictures and got a nice rallye sound in return, because one car of Team Fehlzündung ripped a hole in the exhaust. 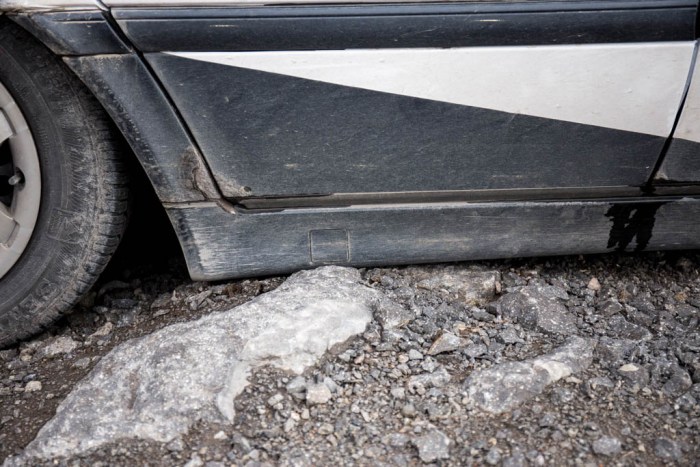 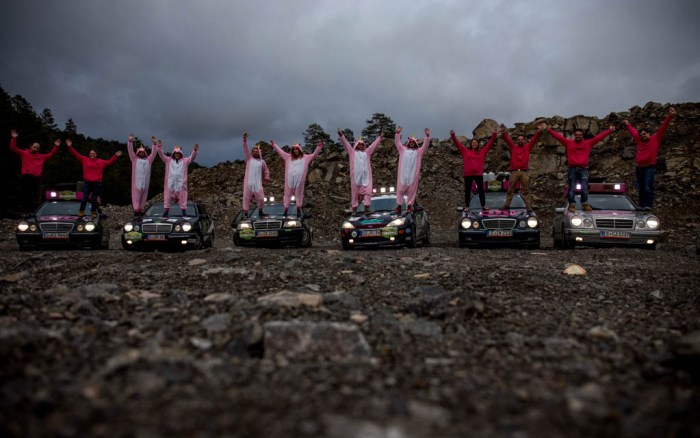 We continued driving until Dr. Sox made a horrible sound in the middle of a small town calle Kibriscik,
We were the attraction of the day and talked to the locals. As it turns out, one of the bystanders is the doctor of the small town.
He was also the only one who spoke English and told us about his work. The Unicamels decided spontaneously to ask him, if he could need anything for his little clinic and so we handed over one of the X-Ray-Viewer and clinical materials. 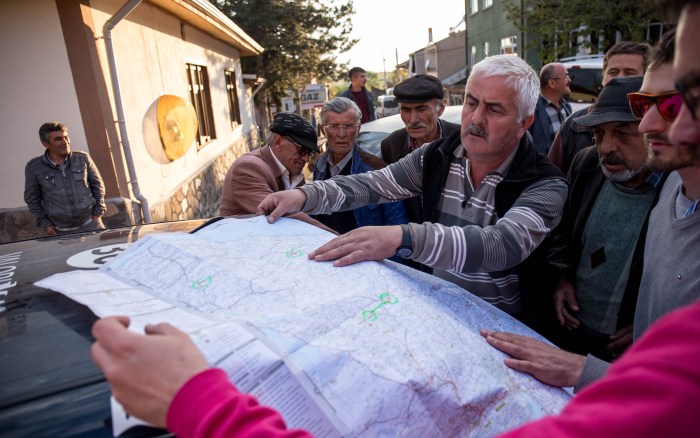 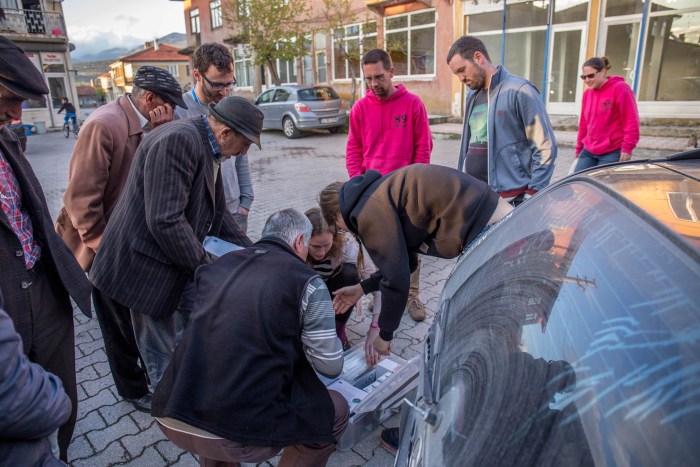 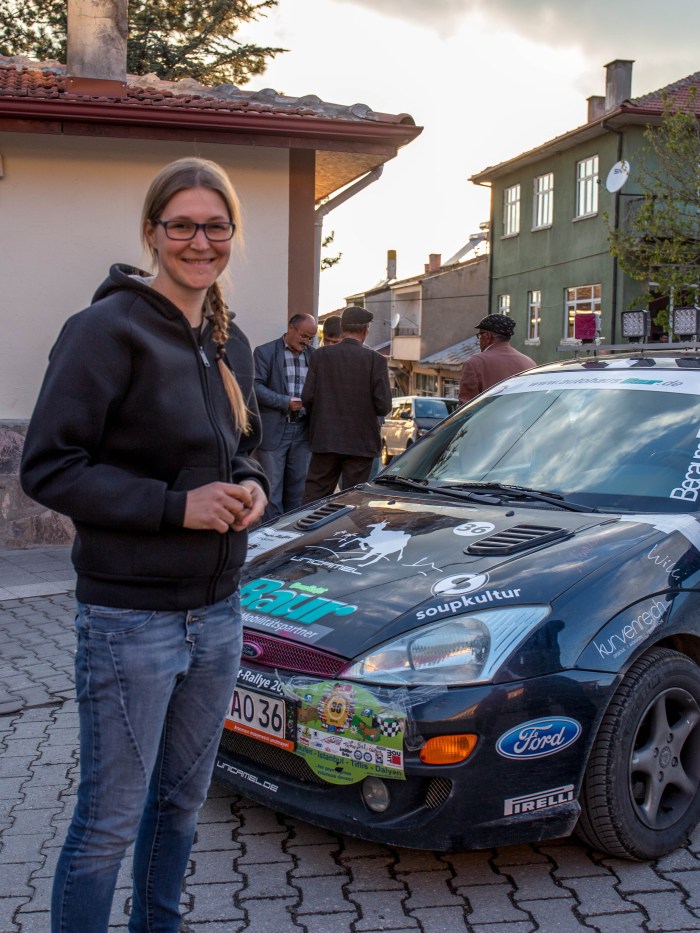 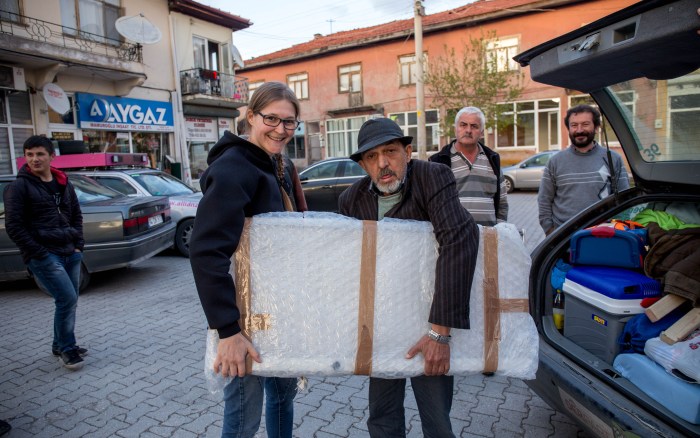 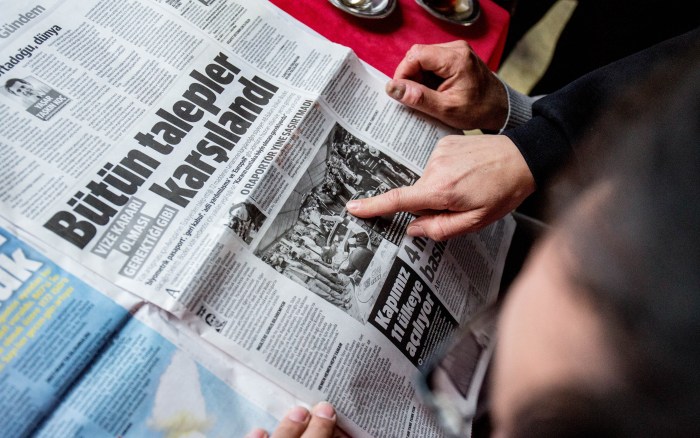 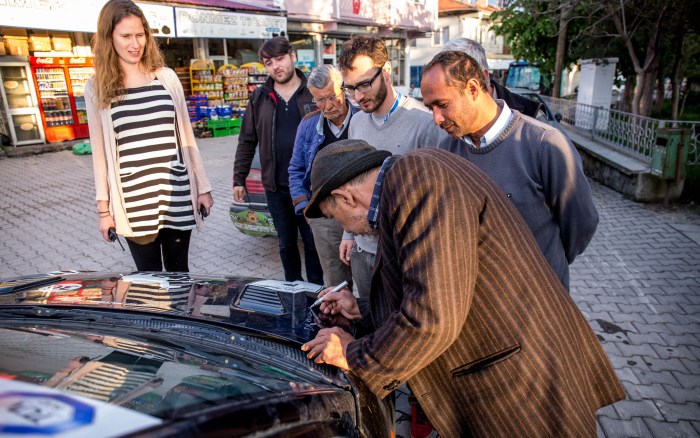 This was very much appreciated and we got invited for Chai again. Drinking Chai we got shown the daily newspaper with an article about the rallye.
As it was already late, we had to leave to find our spot for the night. 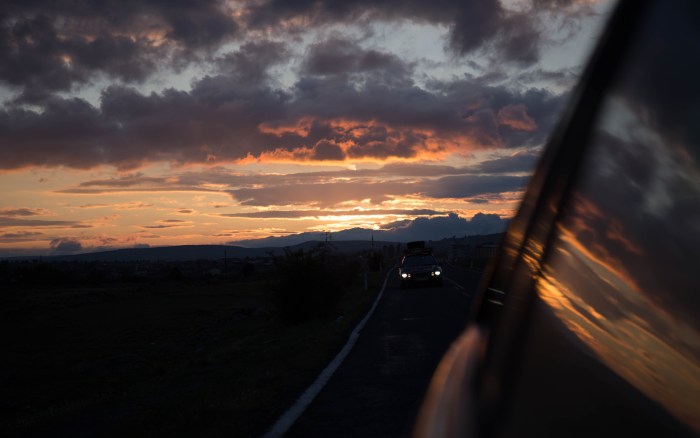 This turned out to be a bit of a mission…a few miles the wrong way… but in the end we found the drivers camp. Right in front of a 24 hour hammam! Yeah! A nice way to end or to start the day… 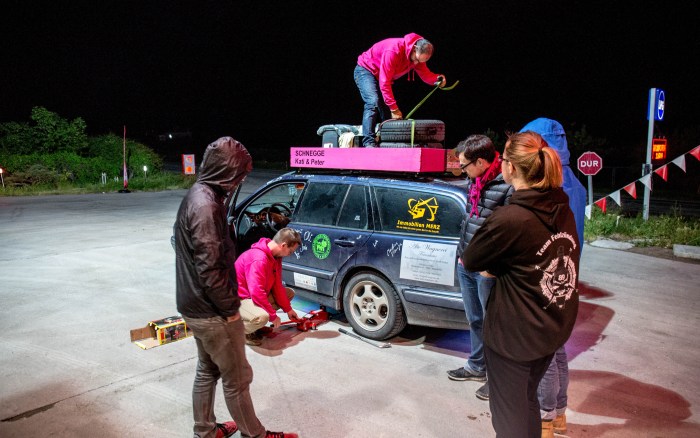